The National – Crafting a Nation

Malik Mohammad was a potter in Istalif before it was destroyed by the Taliban. Now he has returned to making the region's distinctive green and turquoise pottery.

Pictured above, Malik Mohammad was a potter in Istalif before it was destroyed by the Taliban. Now he has returned to making the region’s distinctive green and turquoise pottery.

If you squint your eyes, Istalif could be Tuscany, with the saturated, late afternoon sun casting a warm glow over the mud buildings perched on the edges of its terraced fields.

With your eyes open, you can see Istalif for what it is: a devastated town. It was razed to the ground by the Taliban as they marched to Kabul to seize power in 1996. They burnt Istalif’s houses, killed anyone who did not escape and uprooted the grapevines for which this region was once famous.

Since then, the grape orchards have returned. Towards the end of the summer the main road that links Istalif with the Afghan capital is checked with tablecloths on which layers of raisins dry in the sun, shrivelling to a concentrated sweetness. But orchards recover more easily than towns, people or culture. After so many years of war, Afghanistan’s spirit gasps for air.

Kabul, too, is an aggressive, traumatised city. Houses are either battered or cower behind razor wire. Heavily armed cars driven by soldiers or drug traffickers rumble past like bullies of the road, pushing aside the poor. Anyone on a motorbike with a covered face is a potential suicide bomber. There is hardly a trace left of the genteel city beloved of Babur Shah, the founder of the Mogul empire who is buried here in his 16th century garden.

It is a city, indeed a country, in which aggressors have relentlessly triumphed over victims and savagery over kindness. Beauty has been something to be destroyed, whether it is an ancient minaret or a painting of Buddha. While a vicious insurgency continues unabated in the south, it is difficult to imagine the Afghans have seen anything but war.

Yet there are signs of normality. In two neighbourhoods – Istalif’s main bazaar and Kabul’s historic district of Murad Khane – the artistic heritage of the country is returning. These regenerating communities demonstrate that it is still possible for beauty, order and culture to emerge amid terrible destruction.

In these neighbourhoods small but crucial projects are under way: historic houses are being restored, and artisans have returned to the bazaars. It is a glimpse of another kind of nation-building, one potentially more effective than the billion-dollar projects announced since 2002 to bring democracy and capitalism to Afghanistan. These seemingly modest efforts to revive the culture devastated by Soviet invasion, civil war and Taliban rule may contribute more to mending the fabric of Afghan society than large-scale development projects.

The road from Kabul leading north to Istalif across the fertile Shomali plain is mostly unpaved – and bone jarring. I followed Abdul Istalifi to his ancestral village on a recent Friday, the busiest day of the week, when Kabulis escape the pollution of the capital by picnicking along Istalif’s river. For expatriates, a visit to the town is a chance to buy rare souvenirs fired in the town’s kilns.

After its grapes and raisins, Istalif is famous for the beautiful turquoise and green pottery that its residents have been producing for at least 300 years. The tradition was interrupted by the Taliban, who destroyed Istalif’s main bazaar and an economy dependent on grapes and ceramics.

The war years have broken Afghanistan, but the damage did not begin with the Taliban. The Soviets attempted to transform an agrarian, feudal society into a model Communist state by forcing the landed gentry from their farms. The Taliban accelerated the process of decay, blowing up antiquities and banning the worship of Sufi shrines. After September 11, Dick Cheney said America brought democracy to Afghanistan for the “first time in 5,000 years”, oblivious to the democratic nature of the tribal shuras, or councils, which have kept social order for centuries through consensual decisions among tribes. An entire generation has grown up knowing nothing but how to hold a Kalashnikov, and there were no voices to protest that Afghan culture was older than democracy and more sophisticated than the brutal deeds of the Taliban or al Qa’eda.

The Istalifi family were among the educated class of Afghans who went abroad to escape the fighting. Abdul, my travelling companion and his son Ali, 28, have been instrumental in reviving their ancestral village’s handicrafts and, in turn, its confidence. With financial and logistical help from American friends at the New Mexico-based Jindhag Foundation, they have rebuilt the town’s bazaar at a cost of $120,000 (Dh440,700).

“A few attempts by non-government organisations to revive the place failed,” says Ali. “We thought if we build the economy everything will come out of that. Let’s build the central market and then revive the handicrafts.” That meant rebuilding 120 shops that had been reduced to rubble.

“There was nothing when we first came here,” says Abdul when we arrive, as he surveys the small stretch of road which forms the bazaar. Several shopkeepers shake his hands and show their respect. Clay pots, vases and plates are on display in shop windows and doorways, and piled by the steps of each entrance. Families are relaxing by the river, or eating a kebab snack in the restaurants.

“First come and see the potters at work,” he says, and starts up a rocky hill surrounded by ripening mulberry orchards and narrow freshwater streams. We reach a plateau with a panoramic view of the Shomali valley below. A long time ago, Afghans came here for Eid prayers; for this the plateau is called the Place of Prayer. A pile of pottery lies in the sun on the edge of the plateau, as it has been for centuries.

Istalif is ancient. Its name is derived from the Greek word “stafili”, which means grape. Alexander the Great passed through in the fourth century BC and may have named it after its most delicious export.

“Every family has a kitchen for pottery,” says Abdul, and the kilns are busy now that the families have shops in which to sell their goods. We enter a small room behind a house where Daoud Yusufzada, 28, sits behind a large table hollowed in the middle for the potter’s wheel. The round moist clump on the wheel’s head takes the shape of a large bowl with a fluted edge.

“I learnt this from my father, and his father before that,” he says. “For as long as anyone in my family can remember we’ve been doing this work.” The mud is brought from the mountain by donkey and mixed with water, although the potters keep the precise ingredients a secret. The stunning colours are made from the ground leaves of a shrub cultivated in the northern city of Mazar-e-Sharif.

“We don’t paint the pottery with a brush because it would leave marks,” explains Yusufzada. He describes a “trick of the hand” in which the glaze is poured over the piece in one quick swoop.

Istalif’s plates and bowls are starting to appear in Afghan homes, as a small domestic market for the pottery springs up. But a domestic market is not enough, and the challenge is to help the residents bring their pottery to the attention of the outside world. Handmade pottery fired with a glaze that dates from the 9th century may appear to be an easy sell to a western audience enchanted by The Kite Runner. But the glaze contains lead – and the process of removing it, which would be necessary to sell the dishes in the West, risks ruining the quality of the colours.

Turquoise Mountain, a non-profit organisation trying to revive handicrafts, has been attempting to strengthen the pottery and remove the lead from the glaze to appeal to a foreign market. But Ali says they should be marketed as folk art. Last year, the Jindhag Foundation brought 3,000 pieces of pottery to an art fair in Santa Fe, New Mexico. They were a hit. “People were moved by the beauty of the objects,” says Ali. “And the Afghans were amazed at how many people were interested in them.”

In the beginning, none of the Afghans thought it could happen, says Abdul as we walk back down to the market. It wasn’t easy convincing the shopkeepers that rebuilding was in their interest. “Twenty years of war breaks people’s confidence,” Ali says. “A lot of them said, ‘we don’t know how long this government will last and the Taliban will return.'”

Halfway down the hill is a large square pool around which dozens of people are sitting. At one end water flows in from a natural mountain spring. At the other, the water channels out and continues below to the mosque. The pool is a Sufi shrine, believed to possess healing powers for those who are drinking or washing their hands in it. It is a quintessential Afghan scene – one which the Taliban sought to destroy, as it was incompatible with the extreme Salafi beliefs they imposed on the country. Cultural projects such as this one do more than provide income and employment; they nurture cultural traditions that are at the heart of what keeps a society together. The wounds of war appear as so many millions of tiny cracks in a society’s foundations. These Sufi traditions, like the pottery, are ancient and embedded in the culture and with a little bit of encouragement, they can flourish.

Ali says it cost $1,000 to repair each shop and make it earthquake proof. The villagers cleared away the rubble in 48 hours and used the bricks to build their own homes. The shop owners then rented them out to the potters to sell their wares.

One of the potters, Malik Mohammad, 44, wants to show us a dark yellow teapot with an apple design that stands out from the rows of traditional blues and greens.

“I copied it from a Japanese design,” he says with a note of confidence in his voice as Abdul nods encouragingly.

“We will teach the world our ancient craft in exchange for help. We have crawled out of the mines, from under the rubble and we are willing to work and to create,” he says. “But we just need a little help.”

Abdul explains that the unpaved road from Istalif to Kabul makes it difficult to transport the fragile clay. “They need a road – you saw how bad it was – before we can take this further,” he says, revealing another obstacle to Afghan reconstruction: large-scale projects, financed mainly by America, are rarely carried out in collaboration with small Afghan-led organisations that understand local priorities.

“We paved the way for people to help themselves,” says Ali. “If you want to help Afghanistan you have to do it like this.”

Read the entire article at The National 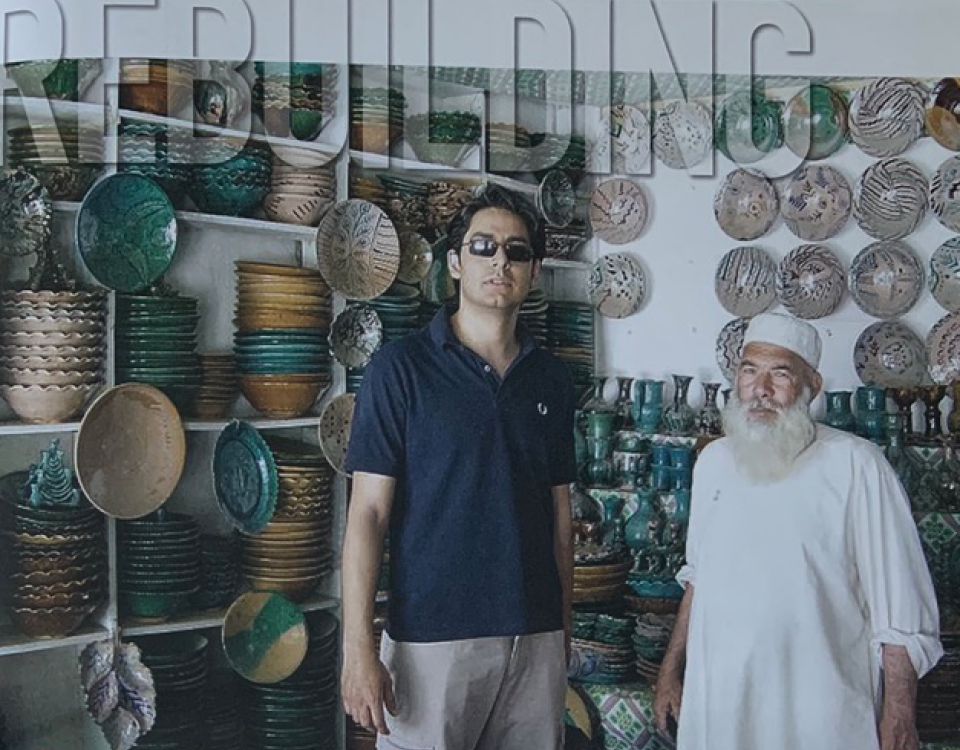 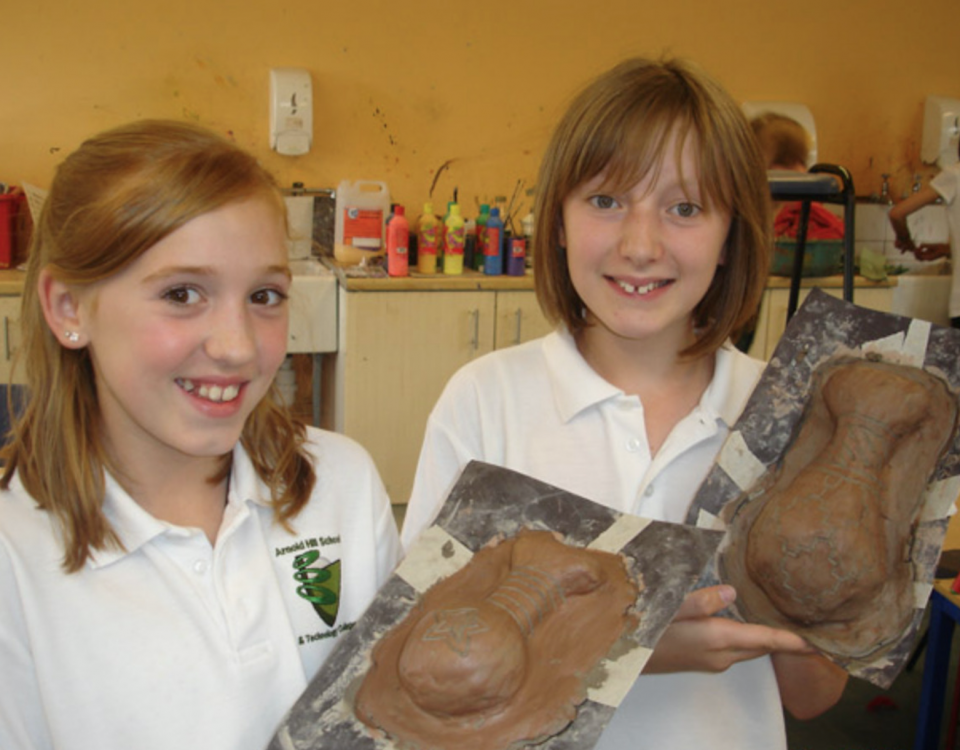 Students make pottery in the style of Istalif, Afghanistan 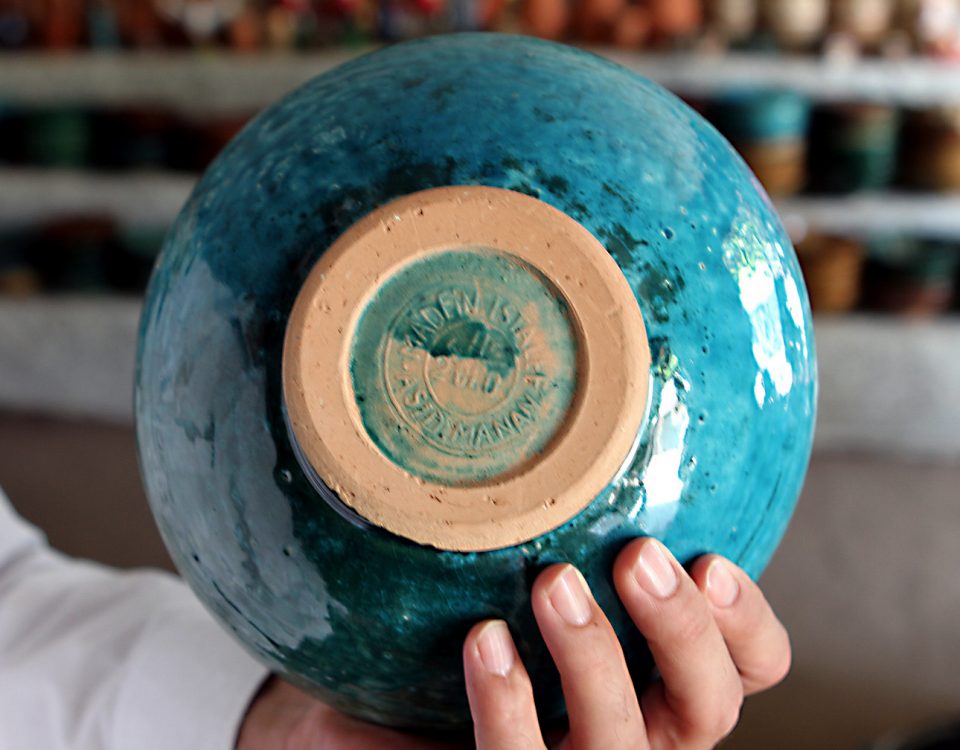 Colorful Istalif pottery on display in a store in Afghanistan.

A Pictorial Guide to Istalif Pottery

The Jindhag Foundation is a charitable organization founded to support and preserve the cultural diversity of traditional and indigenous peoples around the world that are being threatened with extinction and assimilation into modernity.