Abdul Istalifi, and his son, Ali, directed and managed the project on the ground, working with local people and coordinating with the Jindhag Foundation for the resources to rebuild the town market. The project was particularly meaningful for this family as Ali had been sent to London as a teenager and had not returned to his hometown or seen his father for 15 years prior to the start of the project.

Abdul was born and grew up in Istalif. His father was a famous jeweler as well as a respected elder of the village. His mother was a very influential figure in Abdul's life but sadly she died when he was a teenager. Being the eldest son, he always felt a sense of responsibility for not only his siblings but also to preserve the respected status of his father within the community.

Abdul became an entrepreneur at a very early age helping his father with the jewelry business. In his spare time during the winter, he bought malaria medicine from visiting travelers and then he would set up a table in front of his father's shop in the summer to sell the medicine to the people.

As a respected elder, Abdul's father managed various small projects for the village and the community. In one project, his father planned and helped build a bridge that connected outside visitors to the village and made transportation easier. While this was a small-scale project, it was a landmark development for the community that taught Abdul one of the most important lessons in life — the importance of giving and helping the community of which he was a part.

In his early twenties Abdul took on his father's shop where he sold local arts and crafts to visiting tourists both from Kabul and abroad. While others were shop-keeping, Abdul started cottage industries and began reproducing some of the arts and crafts that both Istalif and Afghanistan were famous for.

In his late twenties Abdul moved to Kabul and began trading arts from all over Afghanistan. He built a reputation among international buyers and traders of Afghan arts and crafts. He was one of the very first exporters of Afghan carpets. Because Abdul wanted some of his success to relate back to the community and village he was from, in his early thirties he changed his surname to Istalifi. At this time, many people in the village were working for him and he would also commission specific works from the local artisans. Much of the village looked to him when they were in need and he always provided.

Istalif was on the front lines and suffered immensely during the Soviet invasion and subsequent declining state of Afghanistan as a whole. During the 1980s, many villagers left for Kabul — even thought many didn't even have homes to go to. Abdul, who had acres of land in Kabul, donated this land to the displaced villagers so that they could build new homes.

When Afghanistan faced civil war and as the Taliban came into power, Abdul had the money and the opportunity to leave the country. However he still loved his country and he felt a sense of responsibility to his extended family and the other members of his community. He never left Afghanistan during those turbulent times, rather he stayed behind to look after his people. However, he did send his wife and two sons to London so that they could be safe and away from the traumas of the worsening situation in Afghanistan. He spent all of his wealth during that period in order to protect the extended family.

After the fall of the Taliban, Abdul wanted to do something for Istalif and its people as the village had been completely destroyed. With the help of his close friends Ira and Sylvia Seret and his youngest son Ali Istalifi, he led the Jindhag project to rebuild Istalif.

Ali Istalifi was born in Kabul, Afghanistan. His father, Abdul, was an arts and crafts dealer and his mother was a senior professor of law at Kabul University, specializing in women's rights. During his childhood, Afghanistan was a relatively liberal, peaceful and normal place. In Kabul, in particular, there was no suppression of women nor any strict religious laws.

However, during the 1980s, after the Soviet Invasion, Afghanistan changed dramatically. While Ali was taught in school of the rich cultural history of Afghanistan, he was not allowed to travel outside of Kabul to visit these wonderful places. Even Istalif, the beautiful village that his father was from that was only a 45 minute drive from Kabul, was too dangerous to visit.

As the political situation deteriorated further, Abdul decided that Ali, his brother and mother should leave Kabul and so they moved to London. Abdul stayed behind to take care of the less fortunate members of their extended family.

Ali grew up in London, but with his father still in Afghanistan, he never lost his connection to his homeland. However, as the news stories painted an increasingly bleak picture of the country, by the late 1990s, he wondered if he would ever get to go back to Afghanistan or even see his father again.

In 2000, Ali graduated from Brunel University in London with a honors degree in Film and TV Studies with the goal of pursuing a career in media. However when Afghanistan was liberated in 2001, his life took a different turn. He was finally able to communicate with his father, who expressed an interest in wanting to help rebuild the war-devastated country.

In 2003, Ali and his father Abdul were invited to visit their longtime friends Ira and Sylvia Seret in Santa Fe. This reunion of father and son was also the start of the project to revive Istalif. 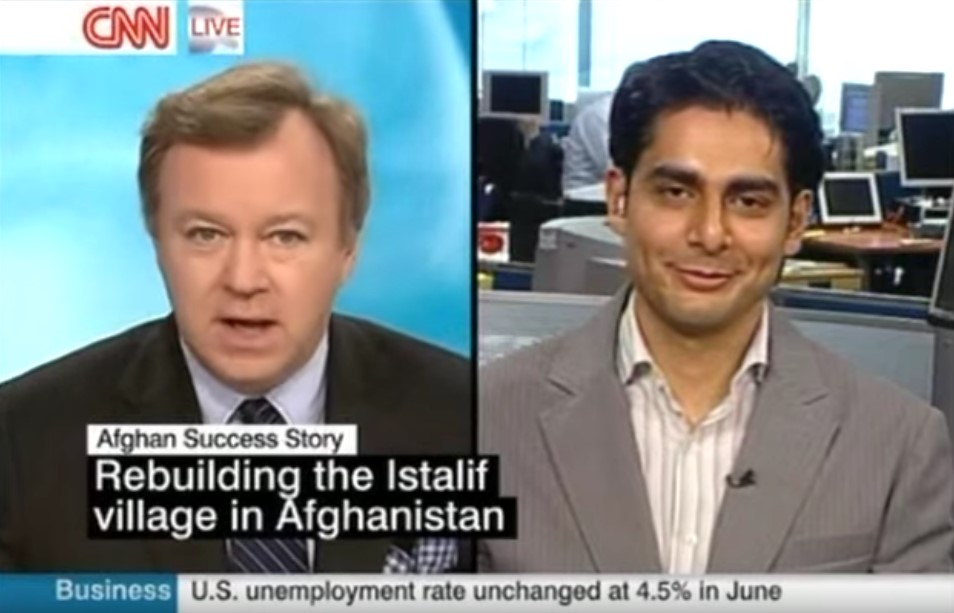 Ali discusses the success of the Istalif project on CNN.

The Jindhag Foundation is a charitable organization founded to support and preserve the cultural diversity of traditional and indigenous peoples around the world that are being threatened with extinction and assimilation into modernity.